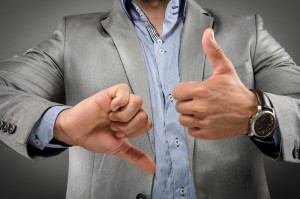 Over a decade ago I created my first Lean enterprise assessment, just as a tool to help me understand gaps in my organization.  I’m generally loath to use such tools as they are generally misinterpreted, gamed or whatnot – but so be it.  It’s a tool and just a tool.  Coincidentally that first assessment tried to measure the use of Lean tools, which lead us down the tool head path – and smack into a wall.  We learned our lesson and began asking “why” and then “how” before choosing the appropriate tool for the problem.

That assessment morphed into something that tries to measure behaviours and perspectives, not tools.  It’s fairly lengthy, but still well-received.  And scary, as it is virtually impossible to receive a high score unless you have implemented Lean from your suppliers through to your customers.

But my point isn’t to pander those tools.  Along the way, both in my organization and in the hundred or so others that have used the tool, I noticed a common trend:

Most people wouldn’t consider that to be progress.  How can you get worse?  But think about what’s happening.  And that’s fundamentally why the assessment is just a tool – it helps you prioritize areas to work on.  Nothing more.

Before starting down the Lean journey, most organizations think they’re pretty good.  Inventory?  Helps buffer issues obviously caused by suppliers and anyone except themselves.  Obviously.  Waste?  Comes with the territory because our products and processes are more complex, different, inherently unstable, etc. (pick one).  People?  Can’t be trusted.

So they look at the assessment, especially the first one that didn’t try to point out such fallacious fantasies (!), and skew it higher.  In their own minds.

Then, if they have a solid Lean leader, they start to learn.  And visit other real Lean organizations.  And attend seminars, workshops, and training programs by the likes of AME and Gemba Academy.  And they start to realize how far down the totem pole they are.  That’s fine, as long as they start to improve.

As they learn, they discover even more areas for improvement.  As they drain the inventory swamp they uncover more problems.  As they train their people – and learn to respect their brains – more opportunities arise.  And they feel even worse.

They try a lot of tools.  Perhaps judiciously, but probably without a lot of forethought.  Many of those tools fail – but they were tried.  And over time as appropriate problems and opportunities present themselves, they remember and apply them again with success.

Nearly a decade later the organization sometimes feels horrible – almost like a failure.  There are so many issues, so many problems, and so many opportunities.  So many tools have been tried and abandoned.  But let me tell you about that organization – and I know because it is mine, and I’m damn proud of those people.

That organization trains on Lean, has a solid 5S program, uses manual and visual systems to manage production across three facilities instead of shop floor MRP (material requirements planning), has reduced lead times by 90%, has morning stand-up meetings in all key departments, is rated best-in-class for quality by its major customers, and outcompetes its “low cost country” competitors – on price and quality – from the not-so-cheap state of California.  TWI (training within industry) is used extensively, autonomous teams have been deployed, and ridiculous budgeting processes have been eliminated.  It hosts tours and workshops by AME, local and state business groups, and in all cases there’s a big “wow!”  It was even successful enough that it built a new 120,000 sq ft facility – in California no less – that leverages massive re-configurability concepts.

But in their minds, they have so, so far to go.  The journey seems to get longer and longer.  They don’t want to apply for Shingo Prizes or AME Excellence Awards – there just isn’t the time because there are so many issues to work on.  Certifications?  A rainbow of belts?  Nowhere.

The more you learn and the more you improve, the more you understand how far away perfection really is.  The depression of excellence?  Until you remember those days long ago, when you smugly thought you were great.